An interview about life and community at
Urban Coup 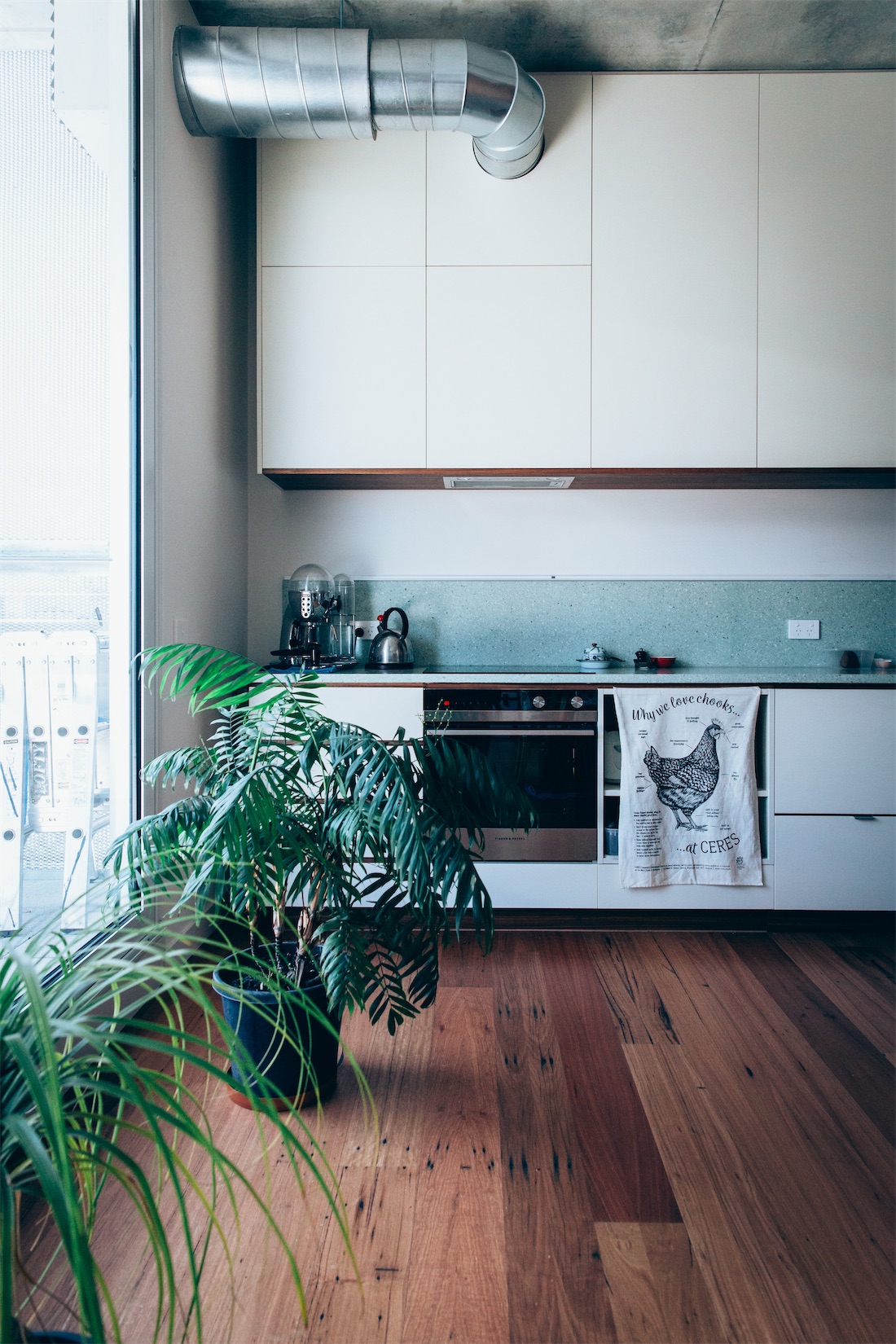 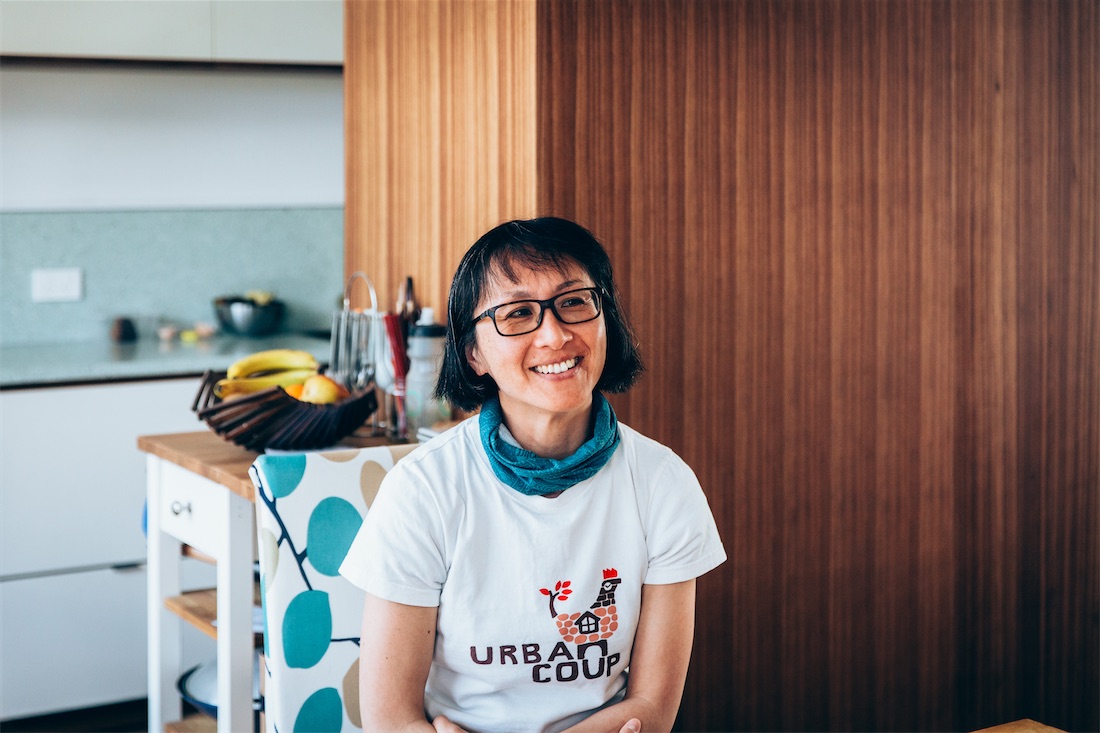 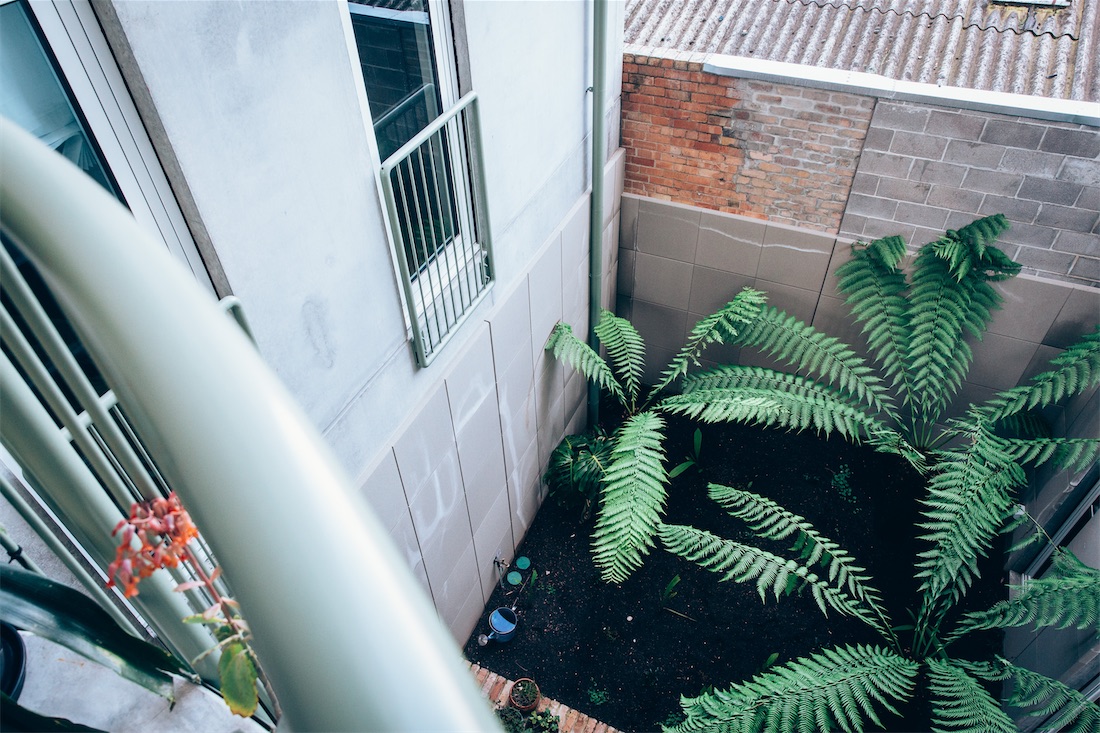 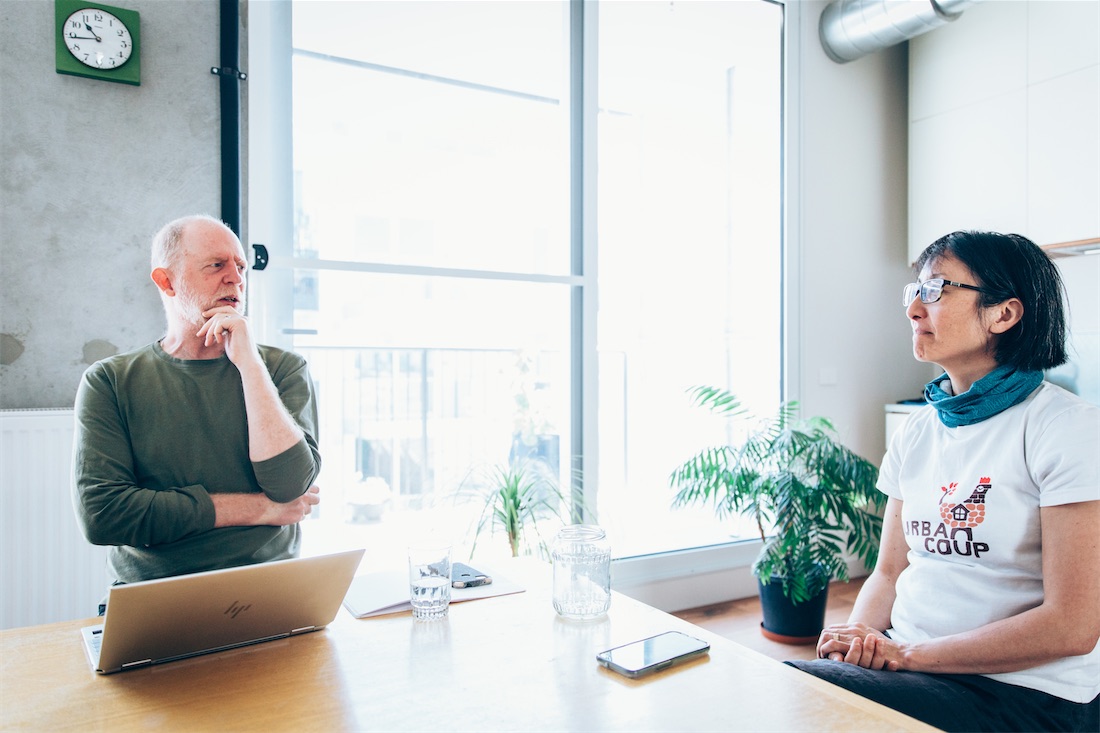 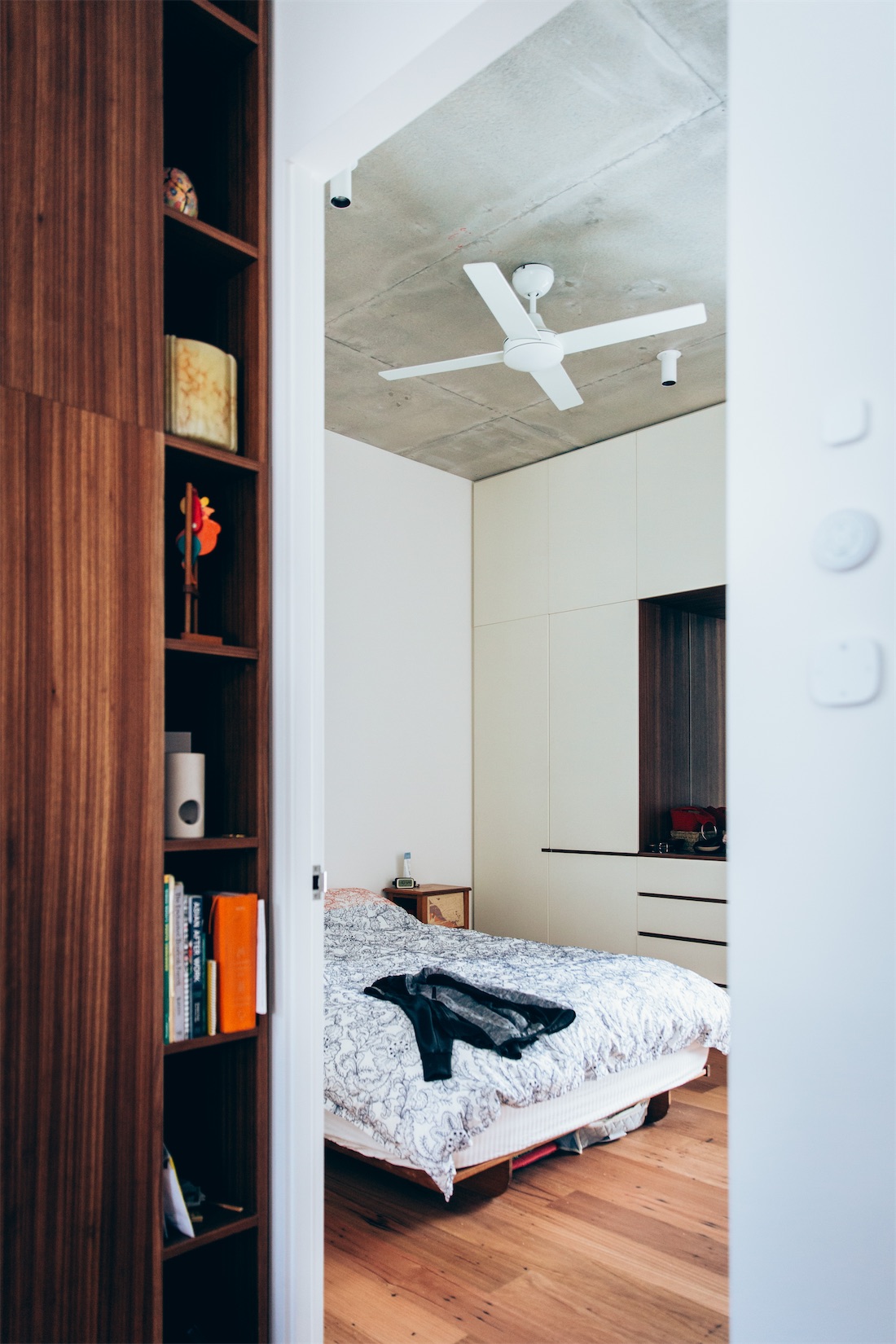 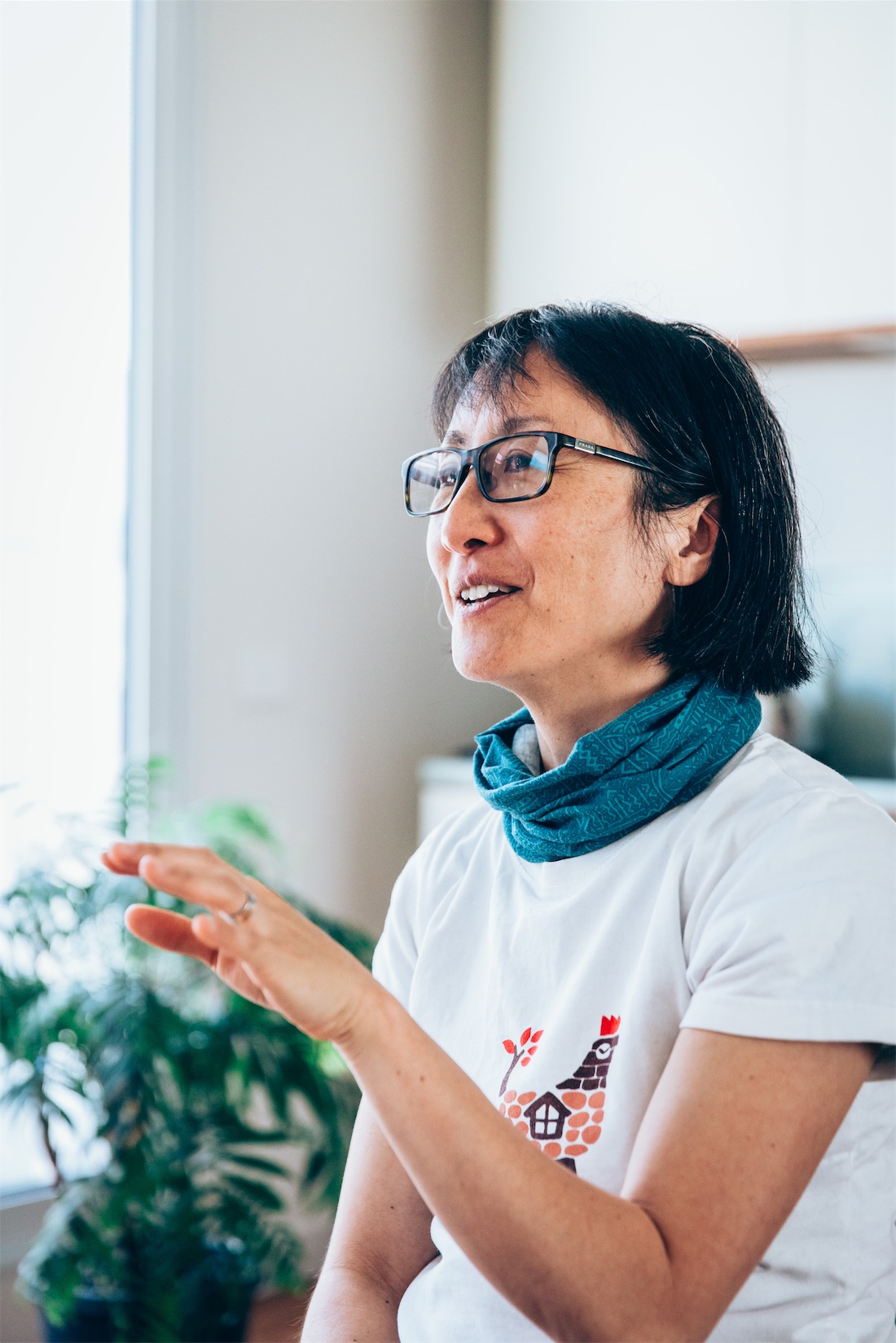 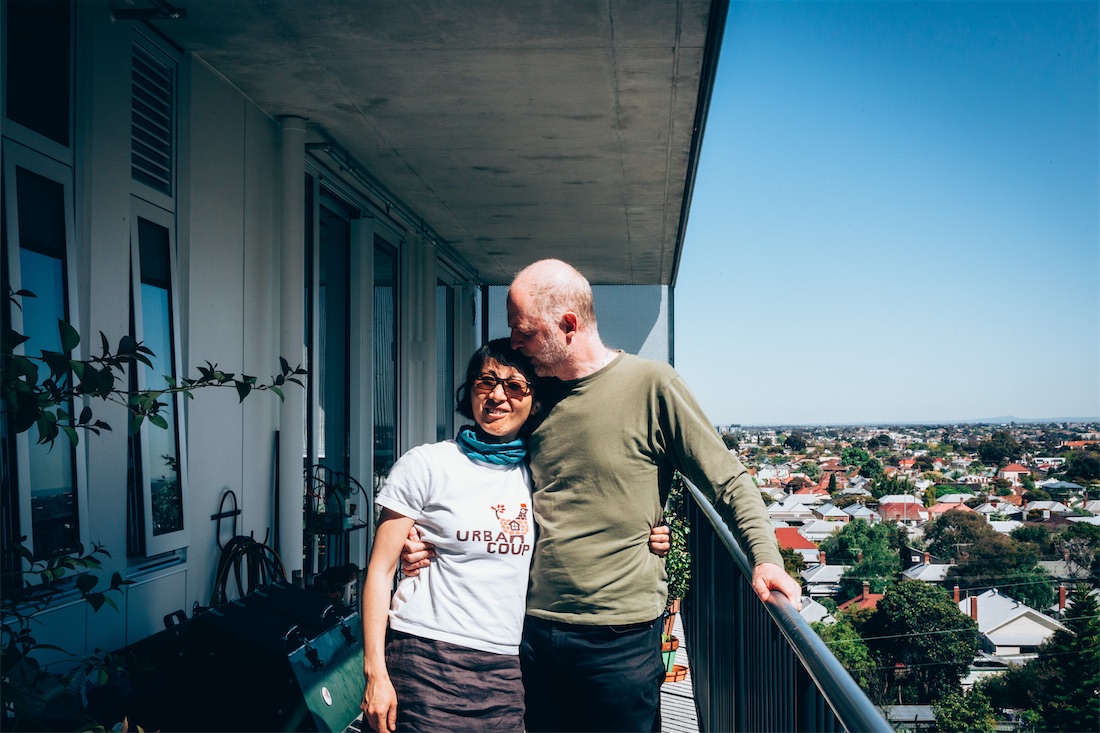 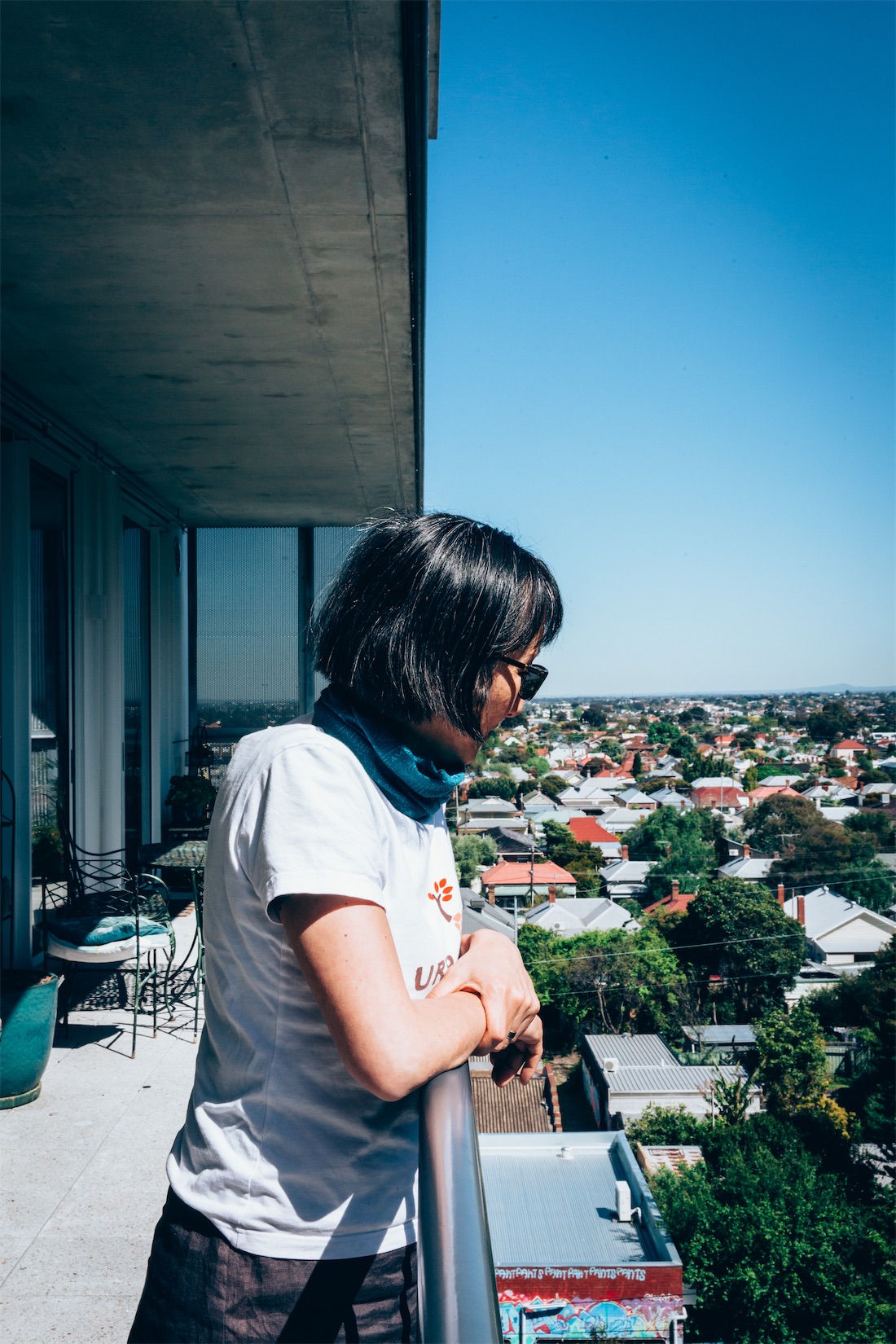 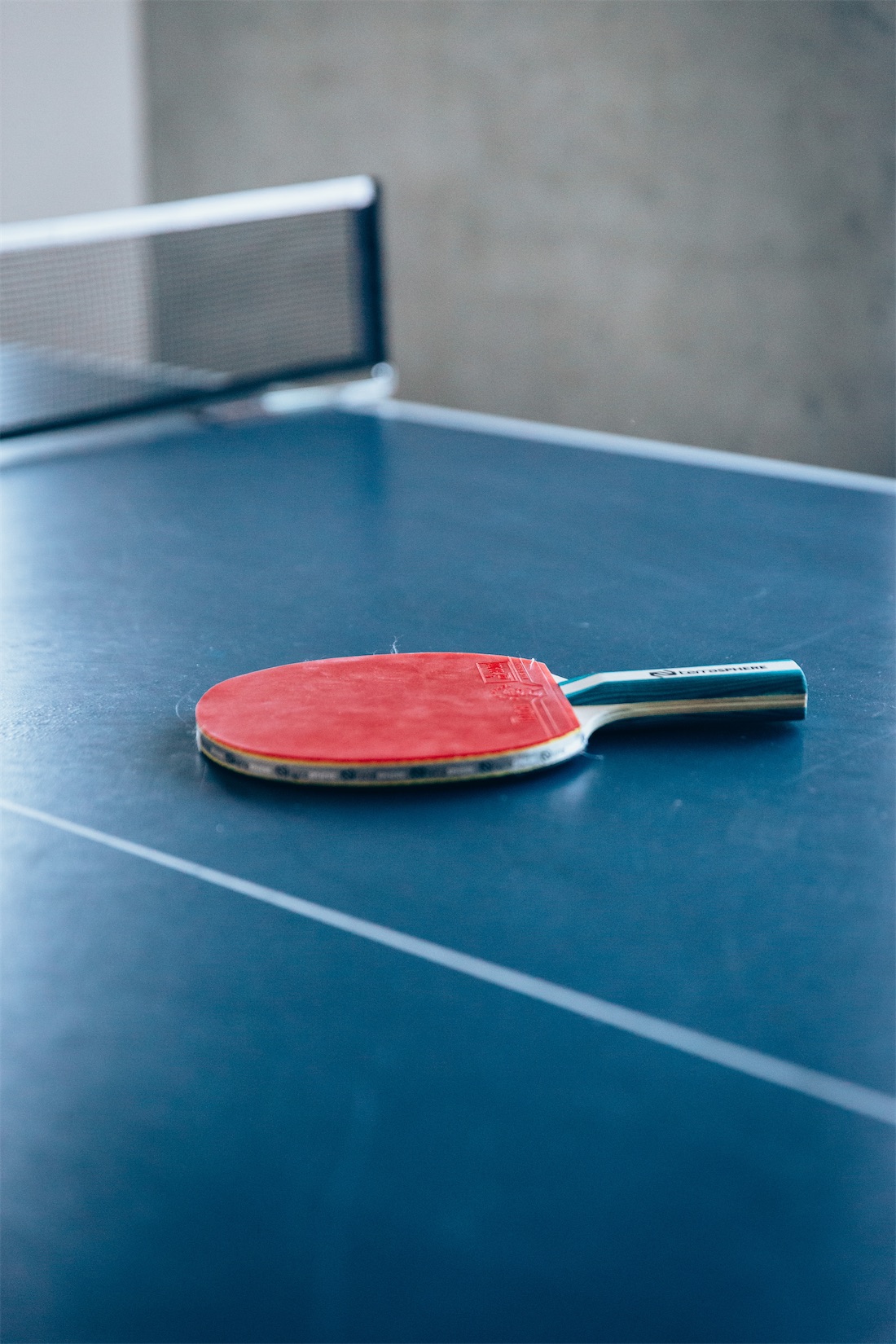 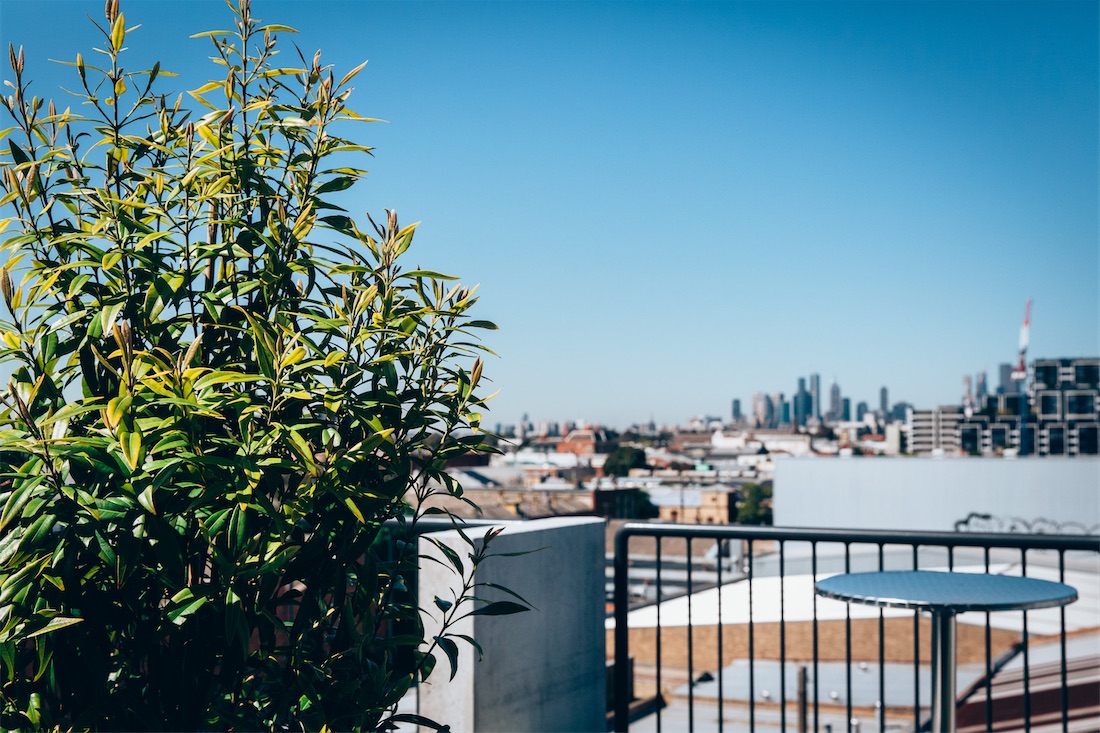 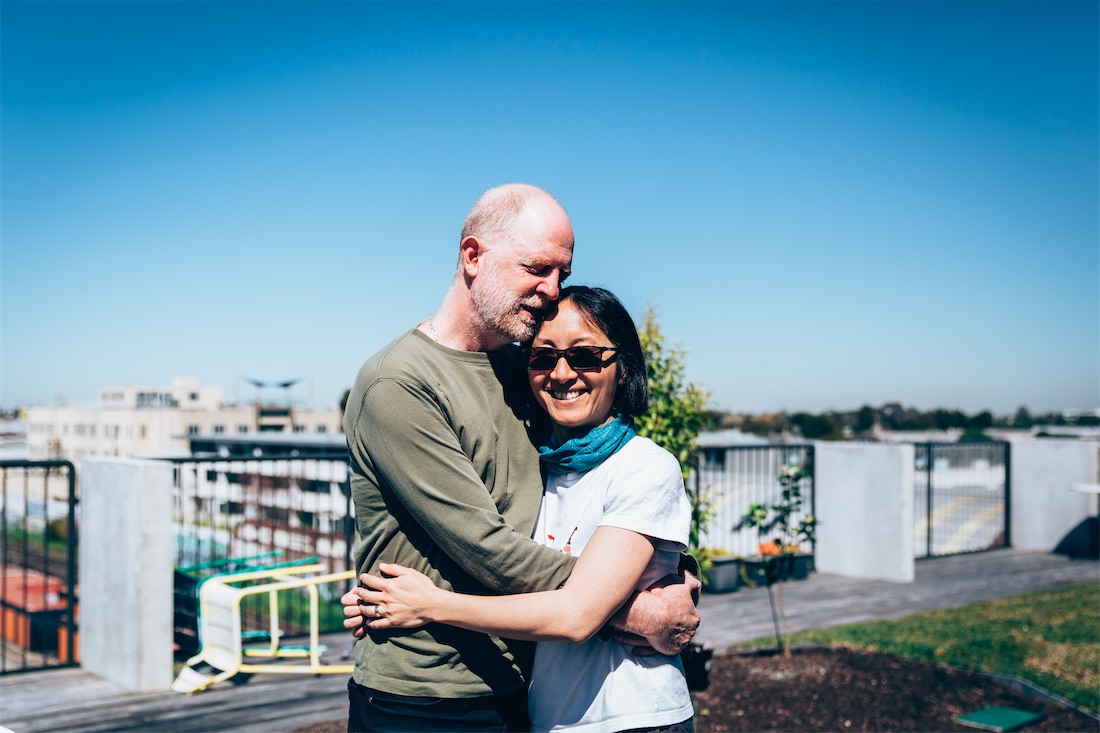 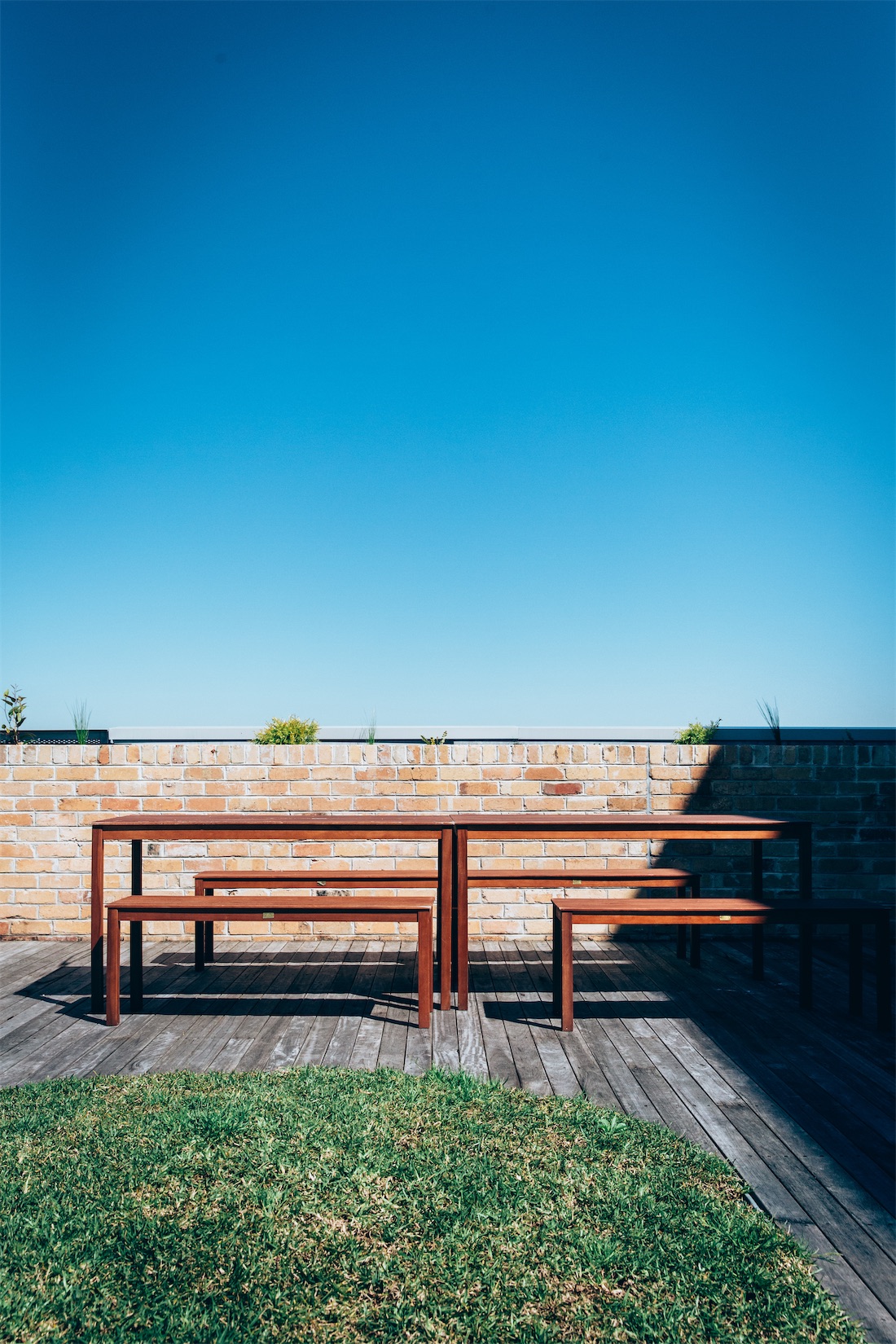 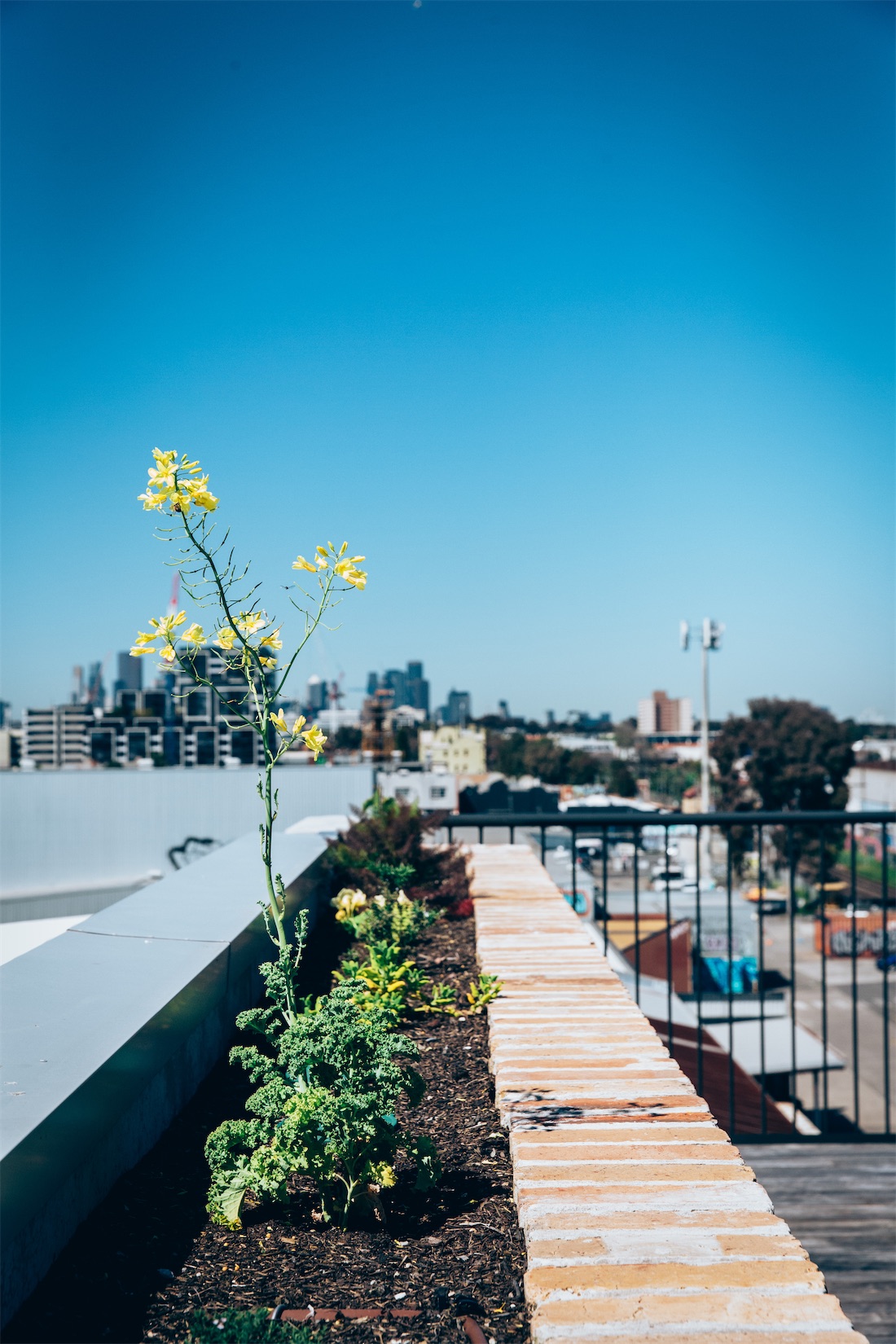 Ta and Alex are two of a handful of people who initiated the deliberative housing community Urban Coup. Their Nightingale story is quite different from our other projects: Urban Coup worked with Breathe and Architecture architecture to create a 29-household building with multiple shared spaces, where their existing community could move in together. Urban Coup is part of The Village.

Tell us a little about yourselves.

TA: I’m Ta. I've been a theatre nurse for more than 20 years. I do anaesthetics and recovery.

ALEX: I’m Alex, Ta’s husband. My background is in industrial design, then I studied environmental science. I’m working on a project called FoodVillage, which is a co-ownership of farms. It basically takes what we’ve learned through Urban Coup around co-investment into a building, and applies that to regenerative food systems. I’m also a director of a not-for-profit called Plastic Oceans Australasia, which delivers programs for schools and businesses around reducing plastic use, and influences government policy at the federal and international level.

Where did the idea of Urban Coup come from?

TA: Alex and I started Urban Coup's journey more than 14 years ago. I wanted to have chickens. I wanted 2,000 square metres of land, and two-storey townhouses, and a massive garden. That was the image at the beginning.

ALEX: Ta and I are part of a handful of initiators. Early on, we were having a conversation around a friend’s dining table about what’s missing from the housing system. Some time later, I was introduced to someone who’d been having the same conversations around her dining table. So it was literally two kitchen tables that came together, and then people found us.

I really wanted to live in a place that had double glazing and was well insulated, and was environmentally friendly. I'd seen fantastic examples when I lived in London. Nobody was building that kind of thing here unless they were doing it privately, at a price tag that we weren’t prepared to pay. Finding well built, well designed homes at a scale that we wanted to live in just wasn’t possible.

TA: We really wanted to live in sustainable houses. We joined Co-housing Australia, and started participating in the Sustainable Living Festival (SLF) every year, and we eventually had a group of people who we wanted to live with.

ALEX: There are a lot of people who were looking for a change, and they found us throughout the 14-year journey. Some people in this building have only known about Urban Coup for a year, some for ten years.

How did you come to work with Nightingale?

TA: We had a chat with Nightingale co-founder Jeremy McLeod more than ten years ago, but at that stage we weren’t ready to build upwards. Eight storeys? We thought, ‘No way.’ We were still dreaming about chickens. But as you know, the price of land went up.

ALEX: We spent three years in a partnership with another company that didn’t work. We had to find a developer that was transparent, and trusted us. When you come along as a community group and say, we’ve got $3.5 million, and we’re good at making decisions, and we’ll guarantee pre-sales… not many people believe that. The biggest risk for developers was that this would be designed and built and then there wouldn’t be sales. That’s not a risk for Nightingale, but it’s a risk for every mainstream developer.

Urban Coup is a demonstration of what is possible between a community group that has money and a vision, and a developer willing to take on a group like that. This is the outcome. It took courage from us to find a partner, and it took trust to make that work.

What was important to you when deciding on a location for the project?

ALEX: Urban amenity, connection with place and walkability were really important for me. We wanted to live within 10 kilometres of the CBD. Ta is an agency nurse; she doesn’t work for just one hospital. Here, there are a lot of hospitals close by.

TA: Also, to be sustainable you don’t want to drive; you want to catch public transport or ride a bike. I can ride to work from here.

ALEX: We have a car; it lives in Coburg in a friend’s garage, half an hour’s walk from here. It’s perfect, because we don't often use it. But for instance, tomorrow I have to be down in Colac for work, so I’ll use it then.

How has this building been designed to suit the needs of the Urban Coup community?

ALEX: We’ve got privacy, and we’ve also got connection. We worked with Architecture architecture and Breathe to get that design, to get the incidental parts where you see each other, where you bump into each other. There are spaces where we can have formal and informal gatherings, like the communal kitchen and dining area. There’s no other building in the inner city that has been designed like this.

TA: As well as the rooftop, we have a flexi room and a guest room. We have a Japanese bath house coming; it’s just a bare room at the moment. We also have a music room and workshop in the basement.

ALEX: It’s also very private. If you need downtime, that’s easy to get.

What sorts of communal activities happen at Urban Coup?

TA: We often do Tuesday night meals. One neighbour loves to cook and we love to eat her food - she’s from Nepal, and we had a Nepali festival, Dashain. We’ve also had a pancake party for fifty people. We have yoga and meditation happening three days a week, and craft on Sundays.

We have eight big tables in the dining room. It’s not like, ‘You can’t come in.’ We’re always sharing. We have a kids’ Ghibli movie night on Saturday.

How do you make decisions as a community?

ALEX: In the early stages of Urban Coup we formalised a decision process that we called ‘modified consensus’. It’s very slow, quite deliberate, and really good for big decisions. It was good for getting us to the point where we moved in.

Since we moved in, we’ve been moving towards a sociocratic framework. The best way to describe that is ‘distributed decision’. Before, everybody was involved in every decision. Now we’re moving towards having a handful of people involved in each decision. Naturally it rolls out to include everyone if it’s a decision that involves the whole community.

We’re working through new processes, and we’re babies in this space - flailing around, having tantrums, working it out.

What’s next for Urban Coup?

TA: I truly believe we don’t have the energy to do another one.

ALEX: This project was built because there was a handful of people with the skills and the time to do it. The next handful can come and do the next project. Urban Coup is established as an association, and anyone who wants to can take the model and do it. We’ve proven it's possible, and we mentored a lot of people on this journey.

TA: Our focus right now is to get the flexi room and Japanese bath and guest room done. Then we’ll have chickens on the rooftop.

Find out more about
Urban Coup
.
Previous
More resident stories
Next
How to purchase